In order to secure data transmission, IPsec VPN uses 2 IKE phases
This phase can be conducted in main mode or aggressive mode

So what is the difference between main and aggressive modes?

Main Mode
There is an exchange of 6 messages. The following figure show this exchange in case of PSK authentication being used 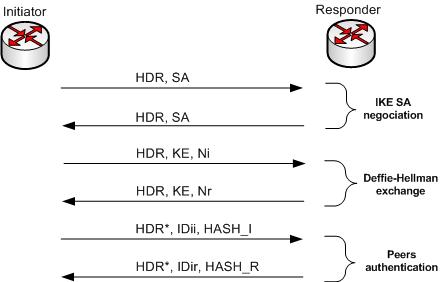 
Aggressive Mode
There is only an exchange of 3 messages. This is illustrated bellow in case of PSK authentication being used

As we can see, there is no payload encryption as in main mode, the identities (IDii and IDir) and hash payload which are used in nodes authentication are not protected, therefore:
·        An observer could determine the parties performing negotiation
·        It is possible to intercept the hash and to retrieve the PSK  by conducting a dictionary or brute force attack. A description of this attack can be found here
·        Since  SA and KE are exchanged in the same time, the Diffie-Hellman group can’t be negotiated

The responder receives the initiator’s identity in the same time it receives  the Key Exchange materials, in this case the correct PSK association can be done even if the initiator is using dynamic IP address 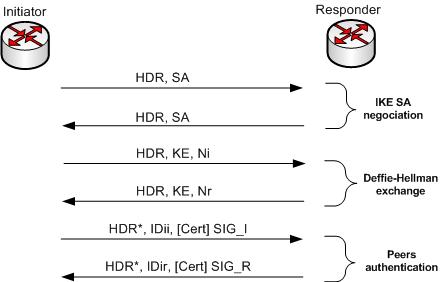 Instead of including HASH_I and HASH_R as in PSK, the Hashes are signed and the signatures are sent instead.
As with PSK, identities are protected


The Shared master secret is generated using parameters exchanged during Key Exchange, so there is no information that the Responder must know in advance as with PSK, therefore the dynamic addressing is supported

As with PSK
·        Identities are still not protected, but the authentication is much more secure as it is based on digital signature.
·        The DH can’t be negotiated
·        Dynamic IP addressing is supported 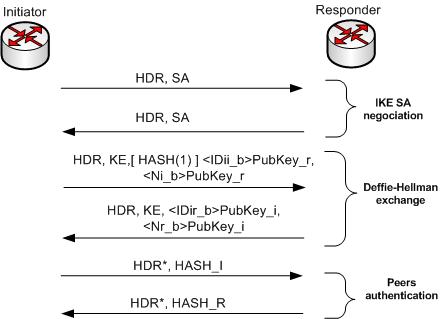 The identities are protected by public key encryption. The dynamic addressing mode is supported as the Shared master secret is generated using parameters exchanged during Key Exchange

Email ThisBlogThis!Share to TwitterShare to FacebookShare to Pinterest
Labels: Security